Some years ago I went skydiving with my friends Fergus and Wendy in Fort McMurray, Canada during an impending rain storm. It was one of those days when you could see the vistas of the horizon and watch the heavy grey clouds roll in like a blanket. It was undoubtedly not a pristine skydiving opportunity but we were anxious to get in a jump, despite our best interests. As we rose to meet the sky the clouds extended over us like a cotton canopy. We leveled out at approximately 6500 feet and flew just under the clouds. I climbed out of the door and held on to the top rim. The wind in my hair I watched the plane skim just under the unbroken cloud. On a whim I reached up and wiped my hand through the fluffy billows, splaying them behind me. For that moment, I was truly alive.

So much of life I have not lived really alive. Days meld into days without end, seasons come and go. It is easy to just exist but not really live. The older I get the more I understand that my life is so short. It’s very easy to live day after day like time doesn’t matter, wasting hours, even months doing nothing notable, nothing meaningful, taking people and situations for granted. 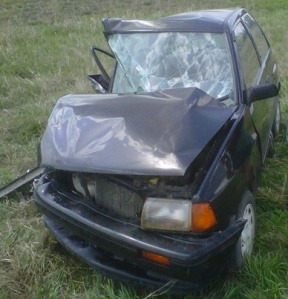 I had a pretty brutal car accident last year. I was in Saskatchewan, visiting friends and attending a wedding. I broke a few ribs and totalled one of best friend’s cars. Everything initially seemed to work out fine. It was a little later that I realized I was quite shaken by the experience and afraid to drive. I had to use some of the cheesy stuff I teach patients to work through it. Things are fine now but I was left with a pervading sense that I am mortal. Last month when I had a grand mal seizure I was again reminded that we are finite beings and need our lives count. Like you, I still have some things to do and want to make my life count for something.

I want to be awake and alive. I want to fan my had through a few more clouds.

If I close my eyes I can see myself clearly from a distance, standing in the doorway, the solid bank of clouds, looking up – then pushing my hand into the solid mass. There is joy on my face. Truly alive.