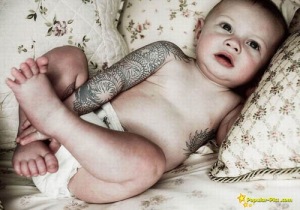 Many of us were damaged emotionally when we were children. We were criticized, we were belittled, we were told how to live, how to act, what to wear and how to think… by other children. Have you been to a playground lately? Have you noticed that their opinions are fairly… stupid?

Or maybe it was a relative who criticized you and turned you into an introvert, or taught you to suppress your emotions, or hide who you are. A relative you now realize is an asshole whose opinion does not matter.

So why are you still acting like he told you to 25 years ago?

Perhaps you had a parent who told you that you were an idiot, or stupid, or worthless. Twenty years later you still battle insecurity, still feel like a loser. In counseling we find out that you feel this way predominantly because of what you were told when you were a child. You now realize that your alcoholic, abusive, degenerate father is a moron.

So why do you still hear that voice in your head?

My grandmother and other relatives told me/taught me countless times that I was a mouthy, disrespectful, immature burden that should be “seen and not heard” (and preferably not seen). I grew up to live up to some of those expectations, perhaps because I believed them on some level. I have taken the time to analyze why I spent so much of my early adulthood trying to fit in, rebelling against the status quo, saying everything on my mind without filtering, etc. In spite of great parents who loved and believed in me I now believe that those relatives taught me important and dysfunctional lessons that I have spent decades trying to come to grips with. With little effort I can still hear my grandmother’s voice. My uncle’s voice.

Mental health professionals are fond of telling us that much of our psyche was formed when we were little children. It is increasingly apparent that many of us had our dysfunctional coping skills, our poor self-image, and our self-destructive tendencies formed while we were yet little people – impressionable, ignorant, socially retarded, childish little kids who had no idea how to filter out the negative and destructive messages. We heard messages and learned lessons that continue to haunt us, regardless of what we understand intellectually. We believe, on one level, that we need to “get over” our past. Making that happen, however, is a different challenge altogether.

We have been imprinted, and those tattoos do not just wash off. It is one thing to realize that you have been molded by dysfunction, it is another thing altogether to effectively break free from that influence. Those attitudes and coping skills have become a part of who you are and how you cope. You have owned them. Really you had little choice.

Every day I talk with people who have been emotionally scarred by childhood or adult friends, or authority figures, or those who were supposed to love and protect them. In counseling they begin to recognize that several of their foundational beliefs and coping mechanisms, ways of dealing with the world that they have relied on for decades, may in fact be deeply flawed. It is a horrible and humbling thing to realize that you have been living your life believing distortions about yourself and your world.

For decades you have believed that no one can be trusted, and you have proven yourself correct countless times. You have evidence to support your cognitive distortions so they must be real. Anger is the way to deal with perceived slight. Always stick up for yourself. Never give up. If you want something done you have to do it yourself. Forget about the past. Meekness is weakness. All men are assholes. All women are bitches. I’ll never get better. I’ll never be able to cope. Never let anyone see the real you. Don’t take crap from anyone. Hurt them before they hurt you. Hitting your partner is ok if I say “I’m sorry”. I won’t measure up. Yelling works. Vulnerability leads to abuse. Nothing will ever change. I’m a failure. I can’t be honest. I’m damaged goods. No one could love me. I’m a loser. The list goes on and on.

Go back to the playground. Go back to that bedroom, that old house, that church basement. Take a hard look at that abusive parent, relative, adult, child. Healing and growth begins when we realize that the voices in my head and the attitudes and coping skills I developed to protect myself may not work anymore. They may, in fact, be keeping me sick and powerless.

You don’t have to listen to him anymore. She was wrong about you. That wasn’t your fault. The coping skills you so despise in yourself isn’t your fault either. You were doing the best you could with very little information and support in a dangerous world not of your making.

It’s not your fault. Talk to someone. Time to question everything. Time to be free.