I talk with clients about sex all the time. It’s a cool job. You cannot live in my world very long without someone telling you the juicy bits. People who wonder if I can keep a secret assume I hear an average amount of gossip, and they would be wrong. I get paid to listen to your secrets. I gave up finding happiness through selling you out a long time ago.

It’s usually uncomfortable to tell me your story, at first. We have been conditioned to feel ashamed of our private functions, if not a little embarrassed. When it comes to sex, it is easy to feel like you are dirty, or kinky, or just different. This week, slightly tongue-in-cheek, news agencies released the stats on average penis length (5.17 inches). Reports called attention to the stigma around even having such conversations. It may sound disgusting but every boy has measured. Someone should have said it. We are products of repression.

It won’t as too much of a surprise to you that, looking out from my chair, there are a lot of problems in the bedroom. I hear the lists everyday, and it can be fun to be a fly on the wall of my office. You would be surprised how many couples, for example, don’t feel sexually compatible. That is a heavy thing to admit to a stranger. Lots of couples have issues with technique and I get paid to research that kind of stuff. Many people have plumbing problems, use your dirty imagination. Lubrication and miscommunication and a lack of vacations add to the discomfort. Couples often have a great deal of difficulty telling each other that this “doesn’t feel nice” because there is usually so much “water-under-the-bridge” and feelings are easily wounded.

Here’s one for free. No one taught me how to satisfy a woman except my occasional exposure to pornography. Talk about what you like, it can be a huge turn-on. I love learning.

Selfishness is largely a Math issue. When I critically analyze my Giddy-Up time, what percentage of my efforts go into helping my partner feel loved? Then subtract my selfishness. Disregard anything that is potentially selfish but mutually enjoyable. The Math works the other way as well. Do you feel loved? Safe? Living with selfishness can be a prison sentence. It can become difficult to remain emotionally healthy while living life with someone consumed with their personal satisfaction.

Now add the intriguing little tidbit that some of us find our sense of self-worth through helping other people. Those people attract selfishness and narcissism like catnip. I’m not saying it’s your fault, just the reverse. This does not negate the fact that predators seek out the vulnerable and if you live to serve others they are going to use that to use you. The spouses of narcissists, psycho or sociopaths, of the raging and the ragingly selfish, are some of the nicest people I have ever met. It says something of a society when selflessness becomes a liability.

Selfishness can be a much larger issue than just a problem with Mattress Polka. Many of us know the sting of life with a selfish and miserable spouse, or the narcissist, or the Drama Queen or King. It always seems to be about them, and not just in the bedroom. Some narcissists are great lovers, but for all the wrong reasons. Use your imagination. Living with someone who is self-absorbed is maddening. 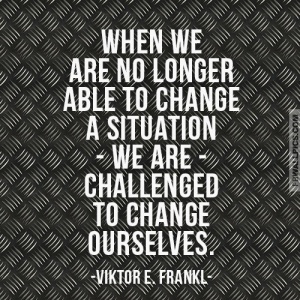 I wish I could tell you there is a fairytale ending, but I would be lying. Convincing someone to live more unselfishly, someone who has spent their entire life developing a value system with only their photo in the room, is an affront to their reality. The only solution that works begins and ends with me. That’s a hard pill to swallow. Don’t get me wrong, I’d love to change you but it won’t work. I hate that but the article isn’t over yet.

There is a mighty hope that we tend to forget in the drama.We can become more and more whole. As Victor

Frankl and others have illustrated far better than I, no one can take away your ability to grow. That is very deep once you get yourself around it. Even in the most abusive of scenarios (and I’ve heard at least as many stories as you), some people learn to hope in spite of it all. I have to believe that anyone can learn, one minuscule step at a time. I have known that soul-crushing despair and wish for death but somehow, over years and years, things have changed. No, it wasn’t worth it, but life has a way of changing my paradigm whether I feel like it or not.

Then the day arrives when we talk about your dysfunction. We need to learn about next time. As the man said, if I keeping doing things the same way I can expect the same results. Most of us believe we learn from our mistakes. Most of us are wrong. It’s shocking, isn’t it, that both your current guy and your ex both like the History Channel? Huh. You’ve come from the bottom but it may happen again. Some of that hurt didn’t just float away. We have all learned entirely screwed up coping mechanisms, unless your parents were perfect, as mine are (Hi Dad). I have long whined that we graduate into adulthood with little or no emotional skills. I didn’t understand my feelings, much less my history, my dysfunction, and my unresolved issues. We were just big and dumb kids, more firmly convinced than ever of our own moral and intellectual certitude.

But that’s another article. I want to conclude by encouraging all of us, myself included, to keep looking after our mental health, and not just with gluten and working out. I work in an industry where everyday people spend thousands of dollars fighting off the end; but who give little or no thought to the only thing that really matters, my inside. And not just your bowel problems. We are all getting uglier, deal with it. But don’t forget to work on the stuff that will define and dictate the rest of your existence.

You may not prevent decay, but we all need to fight Stupid.

One thought on “Selfish Lovers”