Living with someone who is always angry can be one of the most difficult relationship entanglements one could endure. Few problems in this life have as immediate and devastating an impact as anger. If rage is your thing you are probably hell to live with. Just saying.

As pedestrian as it may sound, I often compare anger to an orgasm. There is a point of no return and the house can burn down, you are going to finish. I have witnessed angry persons spewing hate while screaming with astonishingly high degrees of emotion and intentionality. Most angry people feel better after they have “gotten it out”. They have just ejaculated their negative energy and mental health problems on everyone around them and it’s time for a nap. I have written about this before, and graphic this may be, but I’ve known many angry people. Anger is often violent and it’s far easier for the object of wrath to check out than try to match that energy. Some people are much too emotionally invested in obviously trivial matters. You get insanely pissed about tomatoes and I’m not committed enough to vegetables to ruin our relationship over root veg, but apparently you are. Yes I know it’s technically a fruit but as David Mitchell says, don’t get me started. If you put it in a fruit salad it’s a fruit. Next thing you know someone is going to tell me that cucumbers are a fruit. Maddening, but I just remembered that I don’t care about that kind of thing anymore. Mostly.

It is very difficult for me to exaggerate how important it is to deal with unrealistic anger. If you are a person who is easily angered and would admit, after a few shots of tequila, that you might have an “anger issue”, than as a therapist I want to encourage you not to beat yourself up or give up hope. Rage is an extremely palpable emotion that slams you with all manner of intense brain chemicals. 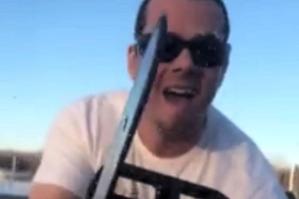 Anger is intoxicating, orgasmic. There is an instant and physical reward for such emotions and as an added bonus you get to feel like a real badass. Angry people win arguments and get what they want, at least right now. Cut me off in traffic and I’ll follow you home and wave a chainsaw at your children, or something like that.

There are a few people I would like to talk with about their anger but they are scary when they get mad. We owe it to ourselves to be brutally honest and recognize that life really really really isn’t fair and it’s not my job to go Punisher on that moron who didn’t wait at the 4-way stop.

If you are living life with someone who is angry, the bad news is there is very little you can do about it. You can never love enough or give enough or sacrifice enough to fix that cancer in someone else. Chances are, living with someone with this issue has changed how you cope or even who you are becoming. The angry person is always willing to take the argument beyond where you are comfortable.  The only recourse that gives lasting results is fixing myself first, until that person can no longer drive me crazy or they die from an aneurysm they so justly deserve.

This always sounds like bad news when we first hear it. We want that other person to change, they are the problem. There is no way you can cope with them as they are. They literally have to win every argument. They are willing to hurt me in places where people who love us should never wander. It is impossible to cope with what is going on around me right now… I hear the words almost every day.

You might be right. There is no way you will ever be able to cope until you do it on purpose. I’ve counselled hundreds of couples and I know the smell of abuse when I hear it. Fear is a powerful emotion as well. For some reason where there is anger, there is usually fear not far behind. Why else would she stay with him or he with her after what that person has done? Fear. Anger is a very useful tool if you wish to control. Violence has always worked, for a while. That’s what that outburst was, when you consider the options. Angry people seem violent, in spite of their constant protestations to the contrary. Screaming is violent control-seeking and is never ok unless you are yelling at a puck or a racist.

I have recorded couples fighting and most are clearly shocked when they watch themselves give in to anger and blow their load on someone else. It happens almost every time; they will turn in their chair and ask their partner, “Am I really like that?”

“Do you really think of me as a violent person?” Pretty much, but none of us are going to tell you, it’s just not worth the fight. See how that works there?

Spouses of angry people are often passive-agressive, or struggle with anxiety or depression or cutting or fatalism. They are often the sweetest among us, those who find their fulfillment in giving everything to a man or a woman that they believed charming and passionate. Passion is a wonderful thing when they are amorous, it’s another thing altogether when they get mad. Violent people tend to be attracted to nice people who will take it and tell their friends, “He just had a really stressful week” for the four-hundredth time.

If you know that you struggle with anger in an unhealthy way, it’s completely appropriate to talk to someone. Tell your partner and family that you acknowledge you have an issue and wish to do something about it. Don’t shut this down; don’t miss out on the good stuff because you can’t free yourself from this impulse-control issue. I do not seek to make light of this problem, quite the contrary. We all need help, from time to time. Anger is nothing more or less than one of the dysfunctional coping mechanisms many of us learn in childhood, or in our first marriage, in order to help us cope with a crazy and dangerous world. We have done the best we knew how but it is important to keep morphing. The more I learn the more light I am given. This is a critical psychological principle which most people will never understand. We must not stay ignorant, or broken, or miserable. Yes I acknowledge that there are times when such thinking not only seems foolish, it feels dangerous. It is in those times, when I was convinced that the situation was hopeless, that I learned the most. I was stronger than I imagined.

If you are living with someone who is angry, you are not alone. Many of us are seeking to understand the sheer magnitude of our addiction to coping mechanisms which have not worked in years. I need to stop trying to change my partner and learn to invest more diligently in my own reality and the need to unlearn my past.

I hate that I can only change myself, but I no longer live in Narnia.

3 thoughts on “My Anger, Myself”