The Princess Bride is, unquestionably, one of my favourite movies. I own the novel. There is something about a magical story, with giants and accents and the Dread Pirate Roberts with which we resonate. A great story can take us to places in our imagination that playing Minecraft simply cannot. Reading matters. My clients have all had the lecture – you don’t read, you don’t grow as fast as you want to. It doesn’t matter how you get your fix, I listen to 90% of my books. What matters is that you are constantly exposing yourself to good ideas.

My wife thinks I actually like Facebook. The truth is, and I’ve written of this in the past, I really do “like” Facebook, in spite of hating Facebook because I want to be a hipster. I have unsubscribed to most of your updates and I really don’t care if you take a selfie on your next trip to Red Robin. My Reader looks nothing like it once did; it’s my daily source for archeology, psychology, philosophy and spirituality and religion and English comedy and Scottish history, Brain Pickings and Cracked and Mental Floss. Most of us on this journey are reading constantly, though some have not yet discovered the thrill of an old book. A surprising number of us start thinking about science, eventually. Some begin to dream about going back to school, though most eventually convince themselves that they are too old or too stupid or too pragmatic. As usual, I digress.

Some times in our lives define us.

My boys and I communicate primarily with media quips and movie quotes; it’s hard to explain if you don’t know what I mean. I was a single dad for the majority of my children’s lives. We had a foosball table, not a dining table. Black couches. As the boys got older, quotes from The Simpsons and Family Guy found their way into many conversations. We began to communicate in prose. We tried to talk like The Boondock Saints and memorized classic children’s literature and Die Hard. People were lost in conversations when the Williams boys were around. Quotes from Descartes and Homer, Simpson. Samurai Pizza Cats and Recess and Roger Miller singing, “Robin Hood and Little John running through the forest”. My guys know history and philosophy, psychology and how to ignite methane. It was the worst time of my life. It was the best time of my life.

I would not wish a life of single-parenting on you, but cannot begin to describe how much I have learned, through it all. My kids are, if I think objectively, way better than your kids. I mean nothing by this, they’re simply amazing young men. We still talk in Simpson’s quotes and share a closeness for which I am daily thankful. We all know that we are so tight because of the tears, not in spite of.

I listen to many speakers in the course of a month or a year. I have my favourites, most of whom are dead. Great speeches, like great comedy, is usually born out of pain. When discussing a preacher or poet or prose-master I am prone to comment, “he hasn’t suffered yet”. There are lessons you can learn only from the dark side. Being a single parent for all the wrong reasons was easily the most difficult and transformational time of my life. There was before The Event and there was after, and this is definitely after. I find it difficult to listen to those who have never bled.

If I’ve learned anything, doing this for a living, it’s that most people suffer far more than they let on. Many have experienced hardship on a level we could never have imagined. People who have been broken have wisdom that others simply don’t have. Some of us have issues as well, to be perfectly honest. Becoming bitter is the easiest thing in the world, north of 40. Many describe themselves as “realists” because they like pink clouds and unicorns. Truth be told, the older I get the easier it becomes to wear my damage like a badge of honour. Being happy becomes something that I have to work on. You may not have noticed but there are some nasty folks out there. Some of us live and love very negative kin. A few of us are a tad more sarcastic than we really need to be.

Most of my readers know I love my old man. If you broke your leg he would convince you that having a cast was the best thing ever! Women feel the love, my dad totally has game. He thinks your zit is charming. You’re beautiful just the way you are, have that bagel. His nickname is Happy Howie. He inspires me to not give up on idealism, on choosing to be happy in spite of all the crap. His life has been anything but easy. Growing up as an orphan, living as an adult while still in middle school, no one handed him anything. Ever. If you visit the Home Hardware in Invermere just stop and listen for his whistle. Everything is wonderful, wonderful.

There are people in my life that cannot seem to stop complaining. Life is difficult for them. I no longer wish to live in that world. Sure Isis may attack or that damn government needs to smarten up, but frankly I am learning not to care quite as much anymore. The research is in and it all points to giving less of a fart about the daily junk that I won’t remember in a week anyway. Most of us spend the majority of our lives stressing about toothpaste and taxes and hoping we won’t die alone. So boring. I no longer care if my neighbour likes my lawn, it’s all crabgrass anyway. I don’t give a 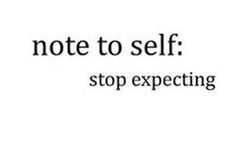 tinker’s damn about so many things that used to drive my mania, though I still have a long way to go. I have been challenged to practice this mindfulness exercise, caring less. I need to figure out how to lower my expectations of life.

As my dad always says, “If it doesn’t affect my pension or my grandchildren, I don’t give a crap.” He’s no idiot, my old man.